This was not a gifted experience. All opinions are my own. 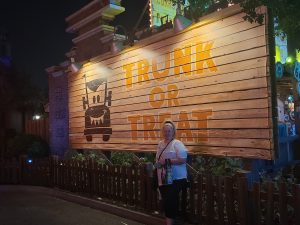 The Oogie Boogie Bash is a special ticketed Halloween event held at Disney’s California Adventure. The event is held for several dates in September and October. Tickets start at $114/per person and increase the closer to Halloween you attend. The park closes at 6pm for regular park guests. Guests can start arriving at the park at 3pm. You would only need a separate ticket to DCA if you plan to attend prior to 3pm otherwise the park entry is included with your OBB ticket. All attendees will receive a small treat bag and wrist band. You will be asked several times throughout the evening to show your wrist band. This event allows both children and adults to dress in costume. People got very creative and was an extra perk to see what everyone came up with. During the Fall, Southern California can still be quite warm in the days and chilly at night so it is recommended to wear layers.

This year the park had 7 treat trails and several character opportunities. Due to the on-going pandemic character experiences in the park at slightly different. Normally you could go directly up to them, get an autograph, and a close contact picture. Now the characters are on a podium or behind a roped off area to help with social distancing and autographs are not happening from what I saw. I was under the impression that all characters at the event would be villains so I was mildly disappointed in the mix of regular characters as well. Characters do not come out until it is fully dark so I recommend hitting up other attractions first and aiming to see characters around 7pm. Some characters were included in a treat trail line up and others had their own line up. We still got to see Maleficient, Cruella, Hook, Smee, Baloo, Evil Stepsisters, Sid from Toy Story and Prince John. One thing that was new to me this time was the the photos that came from Disney Photographers are now free to download and in previous years there wasn’t an option to download and they were paid for only. If I had realized this a before our time in the park ended I would have utilized them more. 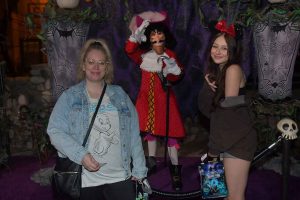 The treat trails had two-three candy bins in each trail to trick-or treat from. We had filled up our bags going through three trails. A bigger treat bag would have been ideal and we regretted not bringing in another bag with us as we would have gone through more of the trails. Each cast member gave out a small handful at each bin. As Canadians it was fun to see the different types of candy flavors being offered as they were not ones we could get at home. The trails did include healthy snacks as well.

The Frightfully Fun Parade has two show times. The later one is less busy so finding a spot is much easier. I recommend watching near the Silly Symphony Swings as it is the start of the parade route. The parade lasts about 20 minutes so if you are at the beginning it allows you to explore the Paradise Pier for the last 40 minutes the park is open without having to cut through crowds. The parade allows you to see the villains that you may not have had a chance to see throughout the park. The World of Colour water show was being refurbished this year and wasn’t part of the festivities.

We didn’t attend Mickey’s Trick-and-Treat show in Hollywood Land but this would be great for anyone attending with younger children. Mickey and friends attend in costumes, dance and tell not-so-scary stories. For all the foodies, several restaurants offered Halloween specific menus. Most are available via mobile ordering as well. 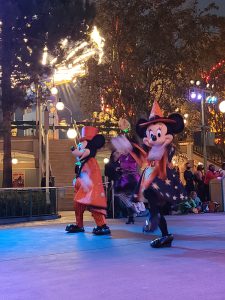 Micky and Minnie in Halloween Costumes

They turned parts of the Redwood Creek Challenge Trail into Villains Grove. It was completely transformed with lighting, projectors, sounds and special effects including a smoke machine. The line was quite long for this as it was a popular attraction throughout the evening. I really liked that once inside it was self-paced and allowed for a bit of social distancing. I did find that it was a bit overhyped for what it was but had I not attended events like Vallea Lumia in Whistler, BC I may have felt differently.

Most rides are also open throughout the night with the exception of the Ferris Wheel. They did have shorter wait times than earlier in the day so it does give you a chance to get on a few of your favourite rides. We wanted to ride the Radiator Springs Racers at night but were worried about candy flying out of the car and didn’t want to pay for a locker so we should have prioritized doing this prior to the treat trails. Cars Land is always really pretty at night but they did a fantastic job of decorating for Halloween. They changed the rides to be Halloween themed- Mater’s Graveyard JamBOOree and Luigi’s Honkin’ Haul-O-Ween.

I think Disney can be magical at any age and the Oogie Boogie Bash really does offer something for everyone. I am very happy that we had the experience and would recommend others to go at least once but I don’t know for the cost of the event if it is something that we would do annually. I would love to see how it is once all the restrictions go away and the Colour of Wonder is finished being refurbished. I also would step up my game from a Halloween themed t-shirt to a full blown costume.

Let me know in the comments if you have ever been to the Oogie Boogie Bash before and what your favourite part of the event was?