I attended a media preview of this show. All opinions are my own. 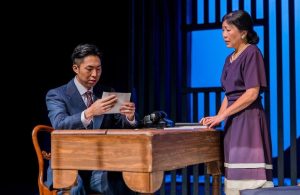 I had the opportunity to check out Manami Hara’s “Courage Now” at the Firehall Arts Centre and was absolutely blown away. It was captivating, touching, and eye-opening. It is a true story based on Chiune Sugihara, a Japanese diplomat, who served in Kaunas, Lithuania. During World War II, Sugihara helped thousands of Jewish people escape Europe by handing out transit visas, risking his career and the safety of his family. As the Soviet Union occupied Lithuania in 1940, many Jewish refugees tried to obtain exit visas. Hundreds of refugees came to the Japanese consulate trying to get their hands on a transit visa to Japan, to flee by rail through the Soviet Union. The Japanese government required visas be issued only to those who had followed the immigration protocol and who had enough capital. Most of the refugees did not meet these criteria, so Sugihara decided he had to ignore his orders, in order to help as many Jewish people as he could. He hand-wrote visas from July to August 1940, spending 20 hours a day on them. He continued on for as long as he could, until he had to leave his post when the consulate closed. It has been estimated as many as 100, 000 people alive today are the descendants of the recipients of Sugihara visas. It is sad to say that the story told in “Courage Now” is still relatable all over the globe today, as war, discrimination and sheer hatred are still very real. Yukiko’s character, played by Manami Hara (also the playwright) was very inspiring to watch. Although she may come across as the doting and submissive wife, at first, she is quite the opposite. She is strong, opinionated and fierce-a total powerhouse. She is not the “woman behind the man”, but rather the woman beside the man. Chiune, played by Ryota Kaneko was excellent as well. He really portrayed leadership, empathy, and of course courage. What he did for Jewish people at that time, was nothing short of heroism. We can only hope that the leaders of today could embody such selflessness. Advah Soudack played Margaret, and she did a phenomenal job. She was passionate and very interesting to watch. Shayna was played by Katherine Matlashewski. Shayna was boisterous yet innocent and soft. A pleasure to watch. Amitai Marmorstein played Jankl and he was wonderful. Protective, cautious, and loving. The entire cast was so talented and really made the story come to life. Although “Courage Now” has a serious and important subject matter as its foundation, there are moments of lightness and humour. It is a highly entertaining and engaging performance, and you wouldn’t want to miss a moment of it. The takeaway for me, was the importance of courage-real courage though. Not lip service or politically correct speech, but action taken for the greater good of the people.

The Firehall Arts Centre is located at 280 East Cordova Street in Vancouver. Tickets range from $20-40. They do offer special pay-what-you can (PWYC) performances as well. You can learn more about ticket options here.