I attended a media preview of this presentation. All opinions are my own. 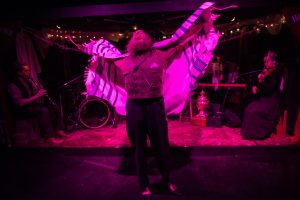 SFU Woodward’s Cultural Programs, as part of its 10th Anniversary, is pleased to present 2b theatre company’s internationally acclaimed of “Old Stock: A Refugee Love Story”. It was written by Governor General’s Award-winning Hannah Moscovitch and I must say it was phenomenal. Klezmer music shines brightly throughout the play, as the tale unfolds. Chaim, played by Eric Da Costa and Chaya, played by Shaina Silver-Baird, arrive in Halifax in 1908 and settle in Montreal, escape their motherland, in order to start a new and safe life. Chaim and Chaya are both trying to leave their past behind them. Chaim lost his family in a brutal pogrom and came to a new foreign land completely alone. Chaya is accompanied by a large extended family but is traumatized by the death of her beloved husband and baby during the journey. He has a positive outlook about starting a new life with her. She struggles to move forward. Chaya’s hesitation and worries are palpable. We come along on their journey as they try to carry on with their lives. Chaim and Chaya represent so many refugees that struggle to carry on.

This story is the story of many, in terms of the refugee experience. As a child of immigrant parents, I really felt how the story could resonate with so many people. Leaving one’s home and coming to a strange new world to start a new life, is not an easy feat. It takes great fortitude and character to pursue such a dream. It made me think about survival. In the age we live in, a lot of thought and effort is put into thriving and “living your best life” but that is such a luxury goal. For many immigrants and refugees, survival is the end goal. If one can escape from danger and raise a family in a “safe country”, that is considered making it. Happiness and enlightenment are considered lofty ideas to many struggling families.

Even though the story was dark, it was such a delight to watch. There were moments of light-heartedness which added a lovely balance to the performance. It was such a treat to watch The Wanderer, played by Ben Caplan. He is a true entertainer. I laughed out loud at his comedic style and was enthralled with his larger-than-life stage presence. I also whole-heartedly enjoyed all of the music. It definitely added to the depth of the play-there were so many layers. Ben Caplan played the guitar and piano; Shaina Silver-Baird was on the violin; Eric Da Costa was on woodwinds; Jacques Arsenault was on the keyboard and accordion and Andrew Wiseman was on the drums. You will not be disappointed when you watch this 2B Theatre Company production. “Old Stock: A Refugee Love Story” will make you think, feel, and even smile. If interested in purchasing tickets, click here.