Top Gun Maverick: An Exhilarating Blast From The Past

Home/Events & Experiences/Top Gun Maverick: An Exhilarating Blast From The Past
Previous Next

Top Gun Maverick: An Exhilarating Blast From The Past 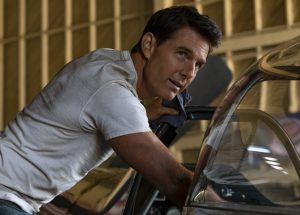 Thanks to the brilliant folks at Paramount Pictures we were invited to enjoy the premier screening of Top Gun Maverick. One of the most anticipated movies of the year, fans from all walks of life have been waiting years for this moment. When we arrived the whole theatre was buzzing with excitement, we even ran into a few friends dressed up in full Top Gun fashion. Being a long time fan of the first movie, like most women my age who also gushed over Tom Cruise, I couldn’t wait to get in, sit down and enjoy the ride, and a ride it was.

It is funny to think that I wasn’t even born when the first movie was filmed (1986) and here I was watching Tom Cruise, looking better than me, up on the big screen in all his glory. I grew up watching Top Gun, adored it like so many of us, and always crushed over most of the leading roles as you do when you’re a teen. It was just so exciting to be a part of the premier for this one… you know, alive. 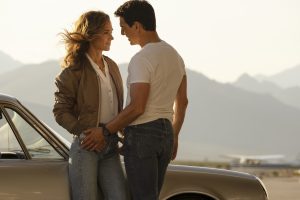 A Little About The Top Gun Plot: Spoilers

The story follows Maverick, who is in his late 50s and works as a test pilot. Maverick retains his youthful confidence and knows how to irritate his superiors, as evidenced by a thrilling opening sequence in which he tests the limits of a new plane. He’s been ordered, in part as punishment, to return to TOP GUN, the top pilot-training school, and prepare its finest and brightest for an impossibly perilous new mission.

One of his pupils is Rooster, a fiery teenage aviator played by Miles Teller. Rooster is the son of the notorious wingman of Maverick, Goose, who perished in the first film while flying with him. Goose’s death has an impact on his relationship with Rooster, an emotional struggle that I enjoyed about the movie. I don’t want to reveal much more than that about the plot but trust me you’ll be on the edge of your seat, and not just because of the sheer volume of the jets throughout the theatre.

The airborne action sequences in this sequel are far more exhilarating and immersive than the original. You have the impression that you are in the cockpit with these pilots, and this is because you are: during filming, the performers received extensive flight training and flew authentic planes. All of the scenes were captured in-cockpit by the cast as they physically struggled through high-G manoeuvres and it will take your breath away. The dogfights are really entertaining, and the majority of the action moments are aesthetically engaging, but sometimes hard to focus on things as they speed through the sky.

As several characters from the previous film appear in the sequel, you will be transported back in time to your favourite Top Gun memories. Jon Hamm, who played Cyclone in the first film, has been promoted to Vice Admiral. Of course, Hamm is the polar opposite of everything Pete Mitchell stands for. Cruise also convinced Val Kilmer to make a brief cameo once again as Iceman despite having suffered with throat cancer in 2017. Jennifer Connelly, who I have loved since the days of the Labyrinth, plays Penny, the admiral’s daughter; is now a bar owner and a single mother. She was a wonderful choice for the love interest this time around for her eyes alone. Their on screen dynamic may not be as thrilling as the one with Kelly McGillis in the original, it wasn’t because of Jennifer. I also found that this movie’s sexy volleyball scene to be not nearly as exciting either so clearly their focus for this movie was action and excitement and less romance.

What Did We Think Overall?

Overall we thought it was a great movie that was filled with excitement, lots of action and did a beautiful job at respecting the classic. It is a must see and we think the bigger the screen you can find the better! If you are sensitive to sound, ensure you take the proper precautions, trust me it feels like those jets are in the same room… you feel sound during this movie, in a whole new way.