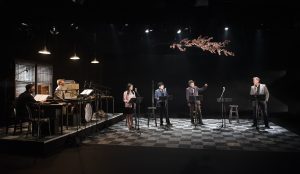 I had the opportunity to check out a media preview of  “Yellow Fever” by R.A. Shiomi at the FireHall Arts Centre, and absolutely loved it. It was my first time watching a play at this venue and I really enjoyed  how intimate it was. You feel really up close and personal with the characters, and it is  impossible to lose focus when you are watching the performance. I typically am not a fan of  mysteries but this one was so captivating and intriguing to watch. Something that I noticed  right away, was that all the sound effects were done in front of the audience, to the side of the  stage. We could see the sound foley in real time, and it made the play all the more engaging. I  also noticed how there weren’t props and backgrounds used. The actors simply used their voices and bodies to carry out the entire story. It was simply amazing. 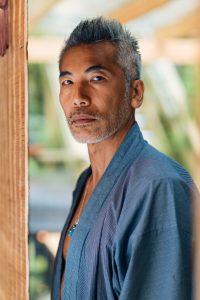 The play takes place on  Powell Street in Japantown, Vancouver, where local Japanese-Canadians gather. The play is set  in the 1970’s and highlights the extreme racism that occurred at that time. The main character  is a private investigator named Sam Shikaze, played by Hiro Kanagawa. I have a real soft spot  for Sam. Sam is a long time resident of Powell Street. He keeps it real and doesn’t have time for pretentiousness and drama. He is a divorcee who is hyper focused on his job and giving back to  the community. Sam is hired to find the missing Cherry Blossom Queen. In the midst of  all this chaos, Sam becomes the interest of Nancy Wing, played by Agnes Tong. Nancy is a  reporter for The Sun, and has her eyes set on Sam for information on this case. As the play  progresses, we see the young and impressionable Nancy fall head over heels for the mysterious  and jaded Sam. I thought that Sam and Nancy had great on stage chemistry and balanced each  other so well. We also meet Rosie, played by Yukari Komatsu, the owner of a small local café that serves authentic Japanese food. Rosie is a kind-hearted and friendly character, who knows  the ins and outs of what goes on in the neighbourhood. Everyone loves Rosie. We meet  Sergeant MacKenzie, played by Craig Erickson, a harsh and cold character, who you can’t help  but despise. Chuck Chan, played by Henry Mah, is a lawyer who is helping solve the case.  Captain Kenji Kadota is played by Jay Ono, is Sam’s old friend and member of the police force.  Sam and Captain Kadota do not agree about politics but they are still very good friends and  allies. All of the characters were very strong, and worked so well together. The sound effects  were perfectly designed and coordinated with the story line.

To be honest, when I read the title, “Yellow Fever”, I felt a little taken aback because it is so  blatant but once I read further, I was hooked. The cast of the play made you laugh even though  the underlying racism was ever-present. They guide you through this mysterious crime scene and take you back to the ‘70s in Vancouver. You truly feel the vibe through the dialogue and  energy. I wholeheartedly enjoyed watching the talented cast, at the perfect venue for the play. If you’re craving a night of entertainment and intrigue, check out “Yellow Fever”.